The Bitter Cycle of Victimhood 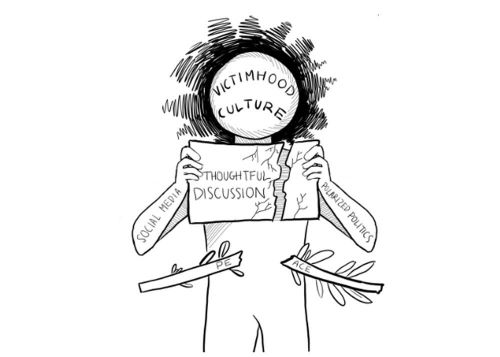 What makes a person believe that others owe him or her more than they owe in return? People who constantly borrow money from others but never pay it back, people who expect others to bail them out from problems they have caused, people who will do anything to get their own way, people who are indignant when they break the rules and then have to suffer the consequences - even people who don't say thank you but expect others to do so to them - these people seem to feel the world owes them more than they owe the world. Is this a personality-driven character flaw or something that has developed over time? It probably has something to do with both, but I have some theories on how someone who is not born the entitled type might cultivate those negative characteristics over the years.

It seems as if a common trait the entitled ones share is a sense of victimhood. These entitled folks often believe that the hurts they have experienced have created a debt to them that others must participate in repaying.

All people experience some type of attack - on their person, their feelings, their belongings, or their beliefs - at some point in their life. The attack may come from another person, an organization, or their own biology. It may have been intentional or just exceedingly bad luck. Most people experience attack more than once. So, if everyone has been victimized at one point or another, what is the difference between a person who has been victimized and a person who is a victim?

It seems to me that victim-hood has stages, and that the difference is found in how deep into those stages a person descends. The stages are:

Stage 1. Feeling like a victim. When something bad happens to us, we all might go here. How long we stay here matters a lot.

Stage 2. Investing in victimhood. This is the point where the feeling-like-a-victim stage turns a corner and gets serious. The person may be determined to find someone to blame, obsessed with getting payback, and so focused on the bad thing that has happened to her that she loses sight of the fact that suffering happens to everyone. It is at this point that the victimhood is embraced and becomes an element of her identity.

Stage 3. Using victimhood as an excuse to not be responsible or accountable for our lives. People in this stage lean hard on the "but I had such-and-such bad thing happen to me," or "you don't know how hard it is to . . . "

Stage 4. Expecting others to compensate for our victimhood. This stage is when victims begin to leech off of others, to have unreasonable expectations and to rationalize asking to receive more from others than they are willing to give back. I also wonder if this stage is when people lose the joy and reciprocity of gratitude.

Stage 5. Defensive victimhood. The by-now-professional victim has to create defenses and rationales to support their bad behavior. These defenses include a unhappy stew of jealousies, petty complaints, and manufactured battles.

If you have one of these victims in your life, then you have probably gone through the "victim-support" stages.

Support Stage 1: Feeling sorry for the victim and wanting to help them in any way.

Support Stage 2: Starting to feel concerned or even frustrated that they aren't doing a bit of bootstrapping, and encouraging them to start working to recover.

Support Stage 3: Getting irritated when they use their bad experience as an excuse, but then feeling like an insensitive support person for feeling irritated.

Support Stage 4: Trying to not feel resentful when they ask for more than they should.

Support Stage 5: Exhaustion with the person who has taxed your love and support (and possibly your bank account) to the limit.

I have tremendous sympathy for people who are going through a tough time. I've personally experienced the ups and downs that life doles out, from deep personal disappointments to financial insecurity to being physically assaulted. I know what it means to be victimized. I also know what it means to choose not to be a victim. The process of healing is different from experience to experience and from person to person, and the only person who can embrace healing and make it happen is the person who is hurting. This takes strength - physical strength, character strength, and the strength to embrace optimism even if you don't feel it. But exercising those types of strength feels better than feeling powerless. So it's a big choice, but it's also immediately rewarding.

If my observations of the stages of victimhood are accurate, then the phrase don't be a victim just took on new urgency for me. I relish the idea that we all come into this world capable of self-sufficiency, able to develop deep resilience, filled with limitless potential, and blessed with the natural grace to give more to this world than we take from it. If being a victim can rob someone of those promises, that's a pretty steep price to pay for out-of-control self-indulgence.