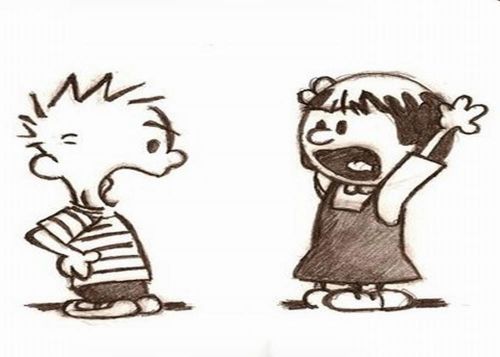 As a society, we appear to have no skills related to argument. What's that you say? We argue a lot? Actually, most people quarrel rather than argue, though they may do so without physical involvement or raised voices. In fact, most people do not know what argument is.

This is unfortunate, because we need good, productive, challenging argument - in our family life, in our businesses, and in our shared communities. Argument is supposed to be the act of thinking together. Of both offering and considering persuasive ideas backed by facts and observations in order to advance our understanding.

Our American culture is most comfortable with competitive analogies - football, baseball, getting elected; each team or individual working to score points at the expense of the other until someone wins. But approaching argument with a desire to win guarantees that you will lose.

The True Goal of Argument

A better analogy for argument is something collaborative: raising a child together, doing a research paper together, hosting a party together: when we collaborate, we offer ideas to one another, and we consider them together, and we toss out the bits that don't work, adopt the bits that do, and together come up with bits that we wouldn't have even thought of on our own. In fact, that last part is the most powerful - we come to understanding and knowledge that alone we could not have accomplished. That's exciting, it's empowering, and it's the stuff that makes our lives vastly more interesting and engaged.

What Not To Do When You're Arguing

Zingers have no place in an honest argument. The minute someone throws a zinger (usually a sarcastic comment, a stinging criticism, a rebuke masked as comedy) walls are erected and communication stops. Zingers lead to anger and defensiveness and more zingers and retreat, and the shared act of creativity devolves into something ugly and uninspired.

Fact Baiting (also known as de-bating) is also not an effective form of argument. Throwing factoids at one another in an effort to win or shame or score a point simply leads to more factoids - it becomes a form of fact-littered quarreling. Facts have a place in a good argument, but their place is to present a concept, discuss the relevance and the reliability of the resource, explore together whether that concept is meaningful and useful in the context of the argument, and see if both parties have been enriched by the admission of it - as well as any facts that contradict it.

What counts for political, pundit, and most community discussion these days is a bunch of zingers made up of out-of-context facts thrown at an opposition in an effort to win.  Recent social reports show that people are feeling uneasy and not very hopeful - and that makes sense to me. We put far more energy into defending and tearing down than we do to creating and building up.

So why do we need argument? Because we need solutions, we need common ground, we need mutual awareness and understanding, and when we do the thinking together we find these things. Sometimes argument gets passionate and noisy, and that's OK when passionate people are also respectful people. The key is to listen, absorb, think, consider what the other person is saying. Ask yourself over and over, "What aspect of what this person is saying is right? Why does this matter so much to this person? What can I learn from this idea that's different than my idea?"

We have become so polarized in our national discussions of religion, politics, and social values. The further we retreat to our respective ends of the spectrum, the less likely we are to get anything done, let alone learn anything new. But if we all tried arguing, rather than quarreling, we might just come to some new insights, which could lead to new conclusions, which could lead to new solutions.

The next time someone presents an idea that you are opposed to or disagree with, try asking yourself what you can learn from that person and what they can learn from you.  When it comes to putting our heads together, one plus one nearly always sums up to more than two.