And Now for an African-American First Lady

04 February 2008
Americans are not only considering the prospect of a black president, but of a black first lady.
Never Miss an Article 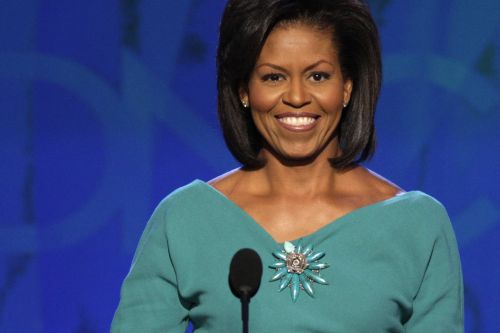 My city's less-than-intellectual newspaper has been distracted through much of the pre-election season by our governor's bid for the Democratic nomination. Not that he was ever a viable candidate, but he was ours and we were treated to interminably long months of evaluating his every expression and calorie. Since he dropped out of the race, the newspaper's ability to shift gears and focus on the larger, more relevant contest has been notably impaired. If our fair citizens know anything about the other candidates, it is due to our own resourcefulness, and not because the newspaper has done an adequate job of reporting on them.

The average reader may not stop to reflect that Michelle Obama has a B.A. in Sociology from Princeton, and a Harvard Law Degree. They probably don't know that she worked for a number of years in corporate law at a major Chicago intellectual property firm, and that in 1991 she embarked upon a life of public service. She was an assistant to the mayor of Chicago, and the City of Chicago's assistant commissioner for planning and development. In 1993 she became the founding executive director of Public Allies Chicago, a leadership training institute that helps young adults develop skills for careers in the public sector. In 1996 she joined the University of Chicago as associate dean of student services, and she developed the University's first community service program. Michelle also served as executive director of community and external affairs until 2005, when she was appointed vice president of community and external affairs at the University of Chicago Medical Center. She also managed the business diversity program, and fostered the University of Chicago's relationship with the surrounding community and developed the diversity program, making them both integral parts of the Medical Center's mission. Michelle Obama has been a tireless and passionate organizing force for public good in one of our nation's largest cities for nearly 20 years.

I don't expect that the Albuquerque Journal expects most of their readers to know this information or to stop and reflect on it. The reaction they likely anticipated -- indeed, counted on -- is the emotional reaction of the simple majority of white people who do not have a black female friend or colleague. Americans are not only considering the prospect of a black president, but of a black first lady. What knowledge, experience, and sensibility do we have to give this consideration its due?

Ultimately, the responsibility for our impressions lies with us -- not the newspaper, not Fox or CNN, not our spouse, or some blog. Just us. Only us. But thinking is not the same as perceiving. Thinking is powerful, evaluative, fundamentally creative. Perceiving is shackled by our emotions, our baggage, our fears and our wants. When we think with our perceptions we are not thinking at all – we're just feeling.

Today I voted for Obama. I believe that both Obama and Hillary (interesting, isn't it, that as a society we've selected the first name for one and the last name for the other? What does that mean?) can handle the presidency and do a good job, so once the caucuses are over I will support the winner with time and resources. But today I was shaken. I like to think that I am a more rational, more careful thinker than most. But perhaps today I simply benefited from a lifelong influence of strong black women. If the trigger had been something different, would I have responded with perception rather than thinking?