It Really is up to Women

03 June 2015
There are many types of women, but society isn’t nice about many (most?) of them. The worst thing we do is divide them into two groups based on womb-output – moms and not-moms. Then we take the moms and divide them into stay-at-home moms and working mons. Then for fun we pit them against each other. 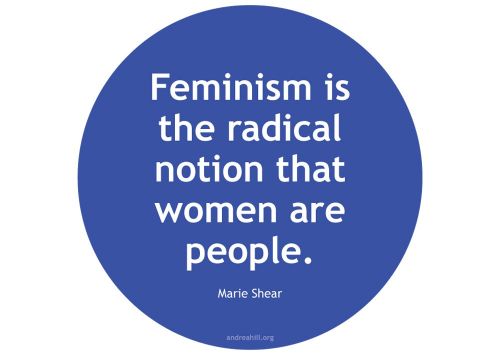 How does any thoughtful woman reject the concept of feminism? After all, feminism is simply defined as “the advocacy of women’s rights on the grounds of political, social, and economic equality to men.” Not better than, just equal to.

That sounds right and reasonable to me. Would anyone argue that we should not have the right to vote? Should we not be safe to walk in the streets, able to rent an apartment or buy a home without the co-signature of a husband or father, eat in a restaurant unaccompanied by a male? And I have yet to hear one reasonable explanation for the fact that women in the United States still earn 73-cents to each male dollar.

I don’t think anyone can present a defensible, rational argument against women having equal political, social, and economic access. Rather, I think too many people – male and female – have a problem with women in general.

Several millennia of enculturation seem to have left genetic reactions where rational thought should be.

There are also many types of women, but society isn’t nice about many (most?) of them. The worst thing we do is divide them into two groups based on womb-output – moms and not-moms. Then we take the moms and divide them into stay-at-home moms and working moms. Then for fun we pit them against each other.

The objections I hear to feminism are typically objections to the women who represent it, not to the concept itself. And – incredibly disheartening to me – many of the objectors are women.

What do we do? First, we get off each other’s backs. So what if that hot (or fat, or too-old, or whatever) woman wears skin-tight clothing? She’s happy with her body. Celebrate her! So what if that mom is (or isn’t) nursing her new baby – she probably knows what she’s doing! So what if that woman just dropped an F-bomb. She’s communicating! So what if she doesn’t shave her armpits (wear a bra, wears socks with her sandals). She’s an individual!

Once we get off each other’s backs, we need to get on each other’s bandwagons. Speak up when you see an injustice. Step up and support women who have been discounted. Promote other women, mentor women, be an excellent boss to other women, be a cheerleader for women. Most of all, refuse to ever give society, business, or individuals alibis for inappropriate and unequal treatment of or respect for women.

We women have immense capacity to be fearless, strong, and outspoken. We use those attributes for those we love. It’s time for us to spread our love a bit wider, to encompass all women. Because once we take ourselves seriously, once we regard each other with the kind of respect and awe that all humans deserve, the rest of the world will fall in line.