(bowing low to The Economist) Great Minds Like a Think

16 February 2008
Are American advertising firms dumbing everything down because Americans are lazy thinkers, or are Americans lazy thinkers because we are confronted -- no, assaulted -- by a constant barrage of stupidity? When we find cultural leaders – thinkers – who respect our intelligence, we demand a great deal of them. And rightfully so. 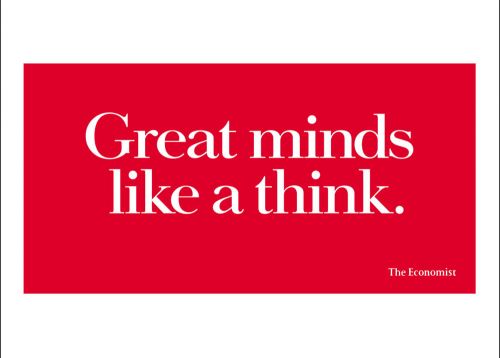 You've read Lee Siegel, the New York-based critic who writes for Harpers, The Nation, The Atlantic Monthly, and The New Republic (again). He writes erudite, prickly prose on the subject of American culture – or what counts for it. At one point the New York Times referred to him as "one of the most eloquent and acid-tongued critics in the country." In a nation that enjoys a bit of battering of our neighbor -- and which lives by the adage if you're so smart why ain't you rich? -- even the most liberal-minded of us get both an intellectual thrill and an ignoble shiver reading his work.

Though I highly recommend him for his wit and range, his personal story is a cautionary tale. In 2006 he was suspended from his role at The New Republic for, well, what? Misleading comments, I believe it was. Siegel didn't break any rules, nor certainly any laws. But he had established an alter-ego that attacked negative commentators on his blog. This alter-ego, known as sprezzatura, was an ardent defender of Siegel, Siegel's wit, and Siegel's shining intelligence. OK, so what, right? He's a little insecure.

The situation was disturbing, but not for the reasons most people pointed to. Most commonly, people expressed their disgust at how stupid it was, how egotistical it was, and ultimately, at what a baby Siegel was. The last comment approaches the reason it was appropriate that Siegel was temporarily suspended.

So what if the critic can't take criticism -- that's a weakness that hounds far too many people to make it interesting. The problem was that he was hypocritical at a level that was a betrayal of his true audience. The role of critic suggests intellectual rigor and standards. Critical thinking is the careful analysis of whatever it is we are evaluating, getting past emotions, reactions, historical baggage, psychology, bias, enculturation -- all of the muck that clouds our thinking and prevents us from seeing reality in the clearest possible light. Not that most modern critics actually perform that role for us, but we wish they would. We need them to. And Siegel is capable of operating at the highest levels of intellectual criticism.

Why do I care about something that that is, by American standards, ancient history? Because of something a friend of mine said tonight. My friend Mark and I were talking about billboards in the UK, and how much we appreciate them. In the United States, billboard writers obviously go through a process that, if you were a fly on the wall, would sound something like this:

Ad guy 1: Dude, we need another billboard for our very difficult client.

Ad guy 2: Damn. Didn't we just finish a bunch of billboards for them?

Important advertising note. Billboards must be able to deliver a message in less than 3 seconds at roughly 55 mph. Ad guys hate to be responsible for traffic deaths. Well, we assume so anyway.

Ad guy 1: OK, what's the simplest way we can say "get your new muffler at Dan's Auto Haus?"

Ad guy 1: No. People don't read that fast. We still have to have room for their website and maybe a phone number.

Ad guy 1: Whatever. I don't think it will work.

Ad guy 1: They'll think it's just a muffler shop. Dan won't like that.

You get the picture. Eventually the ad guys consult a reference book for children's writing and choose three words from the kindergarten list, and that's what passes for advertising in this country.

In the UK, billboards are vexing. Not only are you trying not to wipe out the left side of your car every time you turn the corner and jumping when people pop out at you from the wrong side of the street, but your head is swimming with the last three billboards you read that you still haven't made sense of. UK billboards cater to the thinkers in their society, which they obviously assume are many, given how democratic they are with their puzzling advertising.

Are American advertising firms dumbing everything down because Americans are lazy thinkers, or are Americans lazy thinkers because we are confronted -- no, assaulted -- by a constant barrage of stupidity? Please, don't try to answer that – it's a chicken-and-egg thing.

It's important to read Lee Siegel because he's capable of – and for the most part, delivers – criticism filled with intellectual honesty. I'm pretty sure I never want him to take on one of my publications, because as thick-skinned as I am, I've probably not evolved to the point where I'm ready to read his take on my work without a therapist by my side. Still, he challenges his readers to intellectual debate. This is an experience to which we have become unaccustomed. Siegel doesn't cater to lazy thinkers. Indeed, he writes as if he expects us to be intelligent.

Lee Siegel should be completely forgiven for his past lapse (and yes, I realize that I am the one bringing it up again, but I couldn't figure out another way to make my point). Seriously. If we're being honest, we can all think of foolish things we have done that disgraced us but didn't add any further damage to the human condition.

But Siegel does have a responsibility that is very similar to that of any parent. We know that parents must set a good example for their children. Parental example is something children count on to feel confident. Parental example is the ballast each child needs while bobbing about in the wakes of peer pressure, demoralizing teachers, and Ad guys 1 and 2.

Those of us who seek a more intellectual discourse are dependent on cultural leaders - of all types – to maintain a certain quality of critical thought. This is a completely reciprocal responsibility (did you think you were off the hook?). The only way to create a rigorous intellectualism for ourselves is to give it first to others, and by doing so we are able to receive the thing we want. That's right – intellectualism is not a zero sum game. The only way we can have it is to give it away. That requires dialogue. Which requires risk. Which was Siegel's failure. Shared by the rest of us, though most of us don't have to fail in such a public forum.

Perhaps Ad guys 1 and 2 are not really ready for this. But I suggest we give them the benefit of the doubt. If enough of us gave intellectual discourse away – trusting everyone around us not to be lazy thinkers – perhaps we would discover ourselves, once again, a country that thinks. I'd wager it would do a lot more for our economy than another cut in the Fed Funds Rate or a bunch of $300 rebates.