What does the increasing rate of people living below the poverty line have to do with the United States, and world, economy? Well, a lot.
14 December 2007
Never Miss a Post

Here’s a business problem for you.  According to the National Center for Children in Poverty (associated with Columbia University), “Nearly 13 million American children live in families with incomes below the federal poverty level, which is $20,650 a year for a family of four. The number of children living in poverty increased by 11 percent between 2000 and 2006. There are 1.2 million more children living in poverty today than in 2000. Not only are these numbers troubling, the official poverty measure tells only part of the story—it is widely viewed as a flawed metric of economic hardship. Research consistently shows that, on average, families need an income of about twice the federal poverty level to make ends meet. Children living in families with incomes below this level—for 2006, about $41,000 for a family of four—are referred to as low income. Thirty-nine percent of the nation’s children—more than 28 million in 2006—live in low-income families.”

Thirty-nine percent of American children are growing up in practical poverty. That's frightening.  Thirty-nine percent of our children aren’t getting basic needs met sufficiently. There is ample research on this topic to draw the conclusion that they are not learning to read as well as they could, not learning math as well as they could, not becoming as well socialized as they could. And our obesity problem? Well if you compare the cost of eating at McDonald’s to the cost of buying wholesome food at the grocery store (or, in many cases, a convenience store), it’s actually cheaper to feed your children at McDonald’s. Particularly if mom just worked for 9 hours at $7.00 per hour, rode a bus for 45 minutes each way after dropping off/picking up the kids at daycare, and now she has to figure out dinner.

Just last weekend a well-meaning but sheltered dinner party acquaintance asserted strongly that if poor people would just do their grocery shopping on the weekend and buy raw and fresh foods, they wouldn’t be suffering from obesity at higher rates than those with better incomes. Well I don’t know where you hang out, but I guarantee you, if you wander around some neighborhoods on the south side of Chicago, you can walk an hour in any direction and not encounter a store better than a White Hen or a 7/11. Not a lot of affordable fresh food going on there. And just how many bags of groceries can you carry home on the bus while shepherding a small child or two?

When you add to this statistic that low-income families are disproportionately affected by lack of access to health care, an unacceptable number of children aren’t getting medical attention for serious-but-silent conditions, because unless there is something obviously and terribly wrong, their parents are hoping they don’t have to take them to a wait-all-night emergency room that will cost thousands of dollars and probably give them a secondary infection. Why are they going to the expensive emergency room instead of to a doctor’s office? Because the number of publicly supported clinics is rapidly dwindling and doctors in private practice simply won’t accept uninsured patients. So if half of our children get an injury that has clearly broken a bone or ruptured in uncontrollable bleeding, they’re getting help. But if it’s cancer or something equally quiet until too late? Probably not.

The sad thing is, we don’t even have the worst poverty problem in the world. Does all this mean that we shouldn't worry about children living with much less in other nations? Absolutely not - there are definitely children living in much worse conditions than many (though not all) American children. But given that we are purportedly the wealthiest nation with the greatest resources, it is abominable that 39% of our children are affected by want, compared to just over 2 % of Sweden's children (and we're not #2 on this index by a long shot).

What does this have to do with business? A lot. When nearly 40% of the population has a different set of experiences and options than the other 60%, we create disparities in expectations, preparation, and motivation to work that are difficult to overcome once adults (or adolescents) reach the workforce. We are heading into strange economic times. The likelihood of a recession is looming. But what kind of a recession will it be? Economists never agree on these things, but we all do see one trend coming – the massive retirement of baby boomers leading to gaps in the workforce that subsequent generations are unable to fill based on sheer numbers alone. Add to this a strangely nationalistic time that has led to the strangling of immigration of even college educated and highly qualified individuals, and what do we have? Is it recession plus drastically low unemployment? Is it the inability to innovate or compete on a world business stage? Is there anything worse for our economy, because I can’t think of what that might be.

I believe mightily in the power of capitalism to provide for everyone. In the world. With sufficiency. But capitalism has excesses just like any other economic model, and those excesses must be monitored and managed. So if we are the most affluent country in the world, if we consume more of the world’s resources than any other nation, and if thirty-nine percent of our children aren’t living up to a standard that enables them to get proper medical care and nutrition, it seems to me that something is broken. That something broken is foundational, and if not mended at the root it will lead to disease throughout the system.

How well our kids eat and whether or not they have access to medical care has profound implications for business. It's all connected. 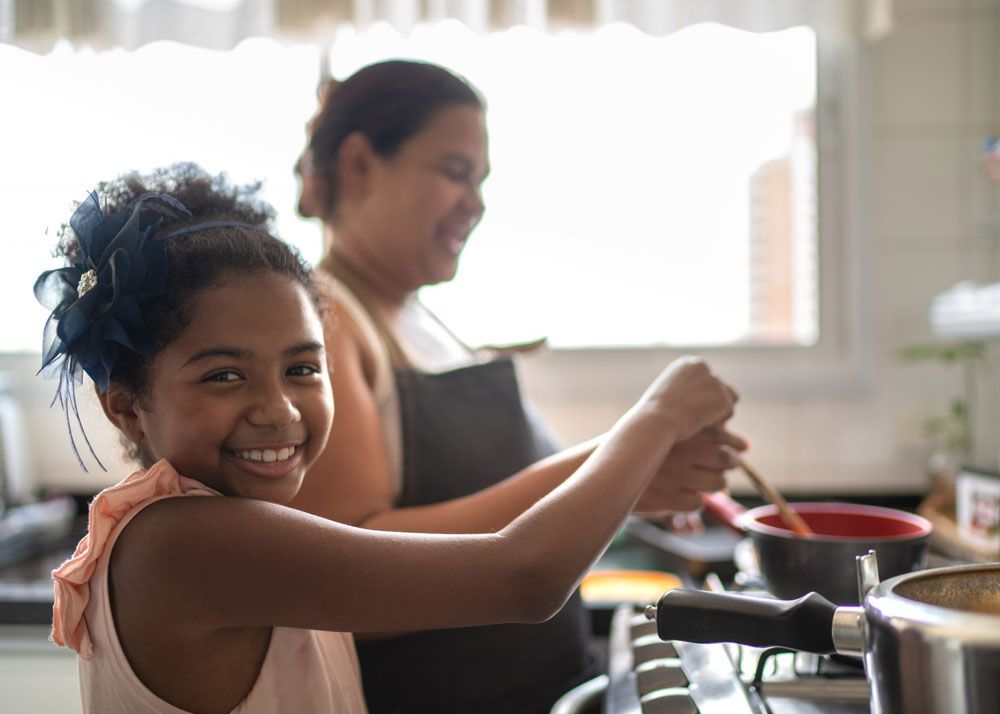