The Introversion of the Jewelry Industry

I am of a split mind when it comes to  comparison between the jewelry industry and the fashion industry. On the one hand, jewelry is definitely part of a woman’s wardrobe and it plays an important role in her expression of her fashion sense (this is true for men too, but to a lesser extent). On the other hand, jewelry is more enduring than fashion, lasting far longer than for one or a few seasons.

Of course, there is the whole category of fashion jewelry, which is more trend oriented and typically at lower price points than fine jewelry.  Fashion jewelry should be getting a lot of our attention, as social and economic trends show that consumers (outside the 1%) are spending less money less often on luxury goods. In fact, fashion jewelry is where department stores, internet sellers, and boutiques are stealing the independent retail jeweler’s lunch.

These observations cause me to ask two questions:

I suspect the answer to the first question lies in two issues: First, the jewelry industry tends to be very inwardly focused, which has resulted in it becoming further and further detached from the consumer. Second, the independent retail jewelers are still sitting on far too much inventory - and much of the reason for that could be due to the first issue.  So let's talk about the fact that the industry is not sufficiently consumer-focused.

The Jewelry Industry Isn't Focused on the Consumer

To be fair, there is one organization in the industry that is focused on taking-it-to-the consumer: JA’s Jewelry Information Center (JIC). In my observation, that group, led by Amanda Gizzi, does way more with paltry resources than one would think possible, and does more to keep the industry’s interests on the radar of consumer editors than any other organization or even combination of organizations. Without JIC, the consumer press would form its perspectives of jewelry entirely outside the influence of the jewelry industry. Think about that for a moment. Think about how much sway the fashion industry itself has on fashion publications. Consumers form their opinions of fashion based on what the fashion industry tells them to think, through fashion shows, fashion editorial, and what shows up in retail store windows.

But with all due respect to what JIC can accomplish with its limited resources, it’s not enough. Why? One concern is that the industry sends out information to the consumer world in the form of editorial, but it doesn’t receive any feedback, or certainly not feedback that is consolidated enough to consider the implications. Another concern is that consumer-focused promotion is not addressed adequately (in fact, barely at all) at the manufacturer and industry levels.

We Must Learn from Other Industries

Fashion shows not only provide information to the marketplace, they deliver almost immediate feedback from the marketplace. Not only do the buyers for all the major department stores show up, but so does the press and a large contingent of influential consumers. At, during, and after each fashion show, there is immediate feedback. The fashions are dissected in the fashion press, the fashion press and business press publish both business and consumer reactions to the styles, and the buying behavior of the department store buyers (well-informed by constant and aggressive consumer research) is a direct line of feedback regarding what will be hot-or-not for that season.

This is also how the Consumer Electronics Shows work for the gadgets industry, how Cannes and Sundance work for the film industry, and how the Tokyo Motor Show and the North American International Auto Show work for the automobile industry.

Of course, these industries are significantly larger in dollars than the jewelry industry.*

But jewelry requires more early and ongoing feedback from consumers than other relatively sized industries such as cosmetics or footwear, where lower price points make experimentation at retail more palatable and in which sports stars, movie stars, and the fashion industry have significant influence. Consolidation of retail in footwear and cosmetics means that individual retail companies have larger advertising and promotion budgets, and it’s noteworthy that the manufacturers of those products speak directly to the consumer in major, ongoing promotional campaigns.

Perhaps a better comparison of a similar-sized industry would be the leisure products industry, which sells high-priced goods like RVs, camping equipment, boats, and 4-wheelers. Through publications aimed at enthusiasts and regional sporting goods shows, the leisure products industry introduces consumers to new features and styles. This gets consumers excited about heading out to retail to buy new toys. Large retailers like Cabelas may have significant advertising budgets, but smaller retailers also benefit from the shows and the promotional support of manufacturers.

What got me thinking about this? An article in today’s Luxury Daily that talks about how the Council of Fashion Designers of America (CFDA) is looking for ways to improve New York’s Fashion Week. According to Steven Kolb, president and CEO of CFDA, “Fashion Week has evolved over the years with the influence of technology, but the format and function of fashion week have stayed the same.” CFDA has commissioned a study to discover how they can “use technology to its fullest advantage, and how designers can best maximize their resources to engage the customer.”

I think the jewelry industry should take this advice to heart as well. A tremendous amount of energy has gone into demanding that DeBeers support the industry (again) with a(nother) consumer advertising campaign, and DeBeers has responded with a half-hearted re-do of its former A Diamond is Forever message. Not only do I suspect this message’s time has come and gone, I also believe that our expectation that DeBeers bail out the industry is misplaced.

Closed Systems Do Not Evolve

The jewelry industry has become a closed system. The majority of its energy is focused on generating income within the industry, with little attention paid to the consumers we require to keep us in business. What is the answer? I’m not exactly sure, though I have some ideas. But here’s what I do know: As an industry, we must talk about this problem. It’s bigger than sustainability, it’s bigger than sourcing, it’s bigger than low-cost manufacturing from other countries, or Blue Nile or Sam’s Club or Costco. In fact, if the industry doesn’t resolve this major disconnect between the consumer and those of us who make and sell jewelry, we could solve all those other problems and still become entirely irrelevant in the next 10 years. 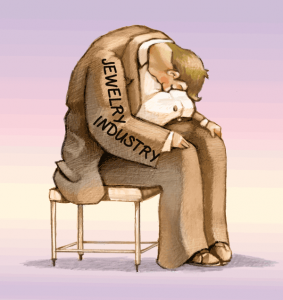