One of the easiest ways to get what you want in business is through simple graciousness. Manners are in high demand, and hard to find. Just ask Miss Manners.
12 September 2012
Follow Andrea

I wasn't going to do any more email after I shut things down tonight, but then I peeked. And I saw an email from a client with a subject line that said "Please Help Me." Of course I had to read it. What followed was a forwarded email from a business associate offering one of the most painfully uninformed (and unasked for) marketing suggestions I had ever encountered. My client wanted to know how to respond, and I said, "With Silence."

After all, Miss Manners would tell you that if you don't have anything nice to say, don't say anything at all. And besides, the email didn't request a response. The writer just said "I thought it would be interesting to suggest . . . "

Another client is faced with a completely ego-centric partner, a person who constantly tries to entice her into uncomfortable games. She doesn't want to get sucked in any more, but she didn't know what to do. I suggested that she place her fist under her chin (think June Cleaver listening to The Beaver as he explains some prank), give an interested but puzzled look, say, "Hmm."  That's with a period behind it. Not a question mark, and certainly not an exclamation. Just a period. Then either change the subject or get up and (pick an activity - get a cup of coffee, return to her office, whatever makes the most sense).

It's easy to invest in the idea that we must express our opinion, must be understood, apologized to, shown more respect, or at least not treated poorly. And when we do that we give away our power to feel really good about ourselves by prevailing in the strangest - or most uncouth - of situations. I know from experience that simply looking at someone who has just been terribly rude to you, giving them a quizzical smile and no other reaction, can really rattle their chainmail - while at the same time protecting you from a potentially childish or ugly interaction.

Good manners are the stuff of civilization. They are a powerful antidote to behavior that is (sniff) rather inappropriate. And let's face it - in some situations it's actually quite fun to walk away feeling superior. 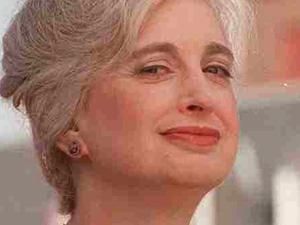