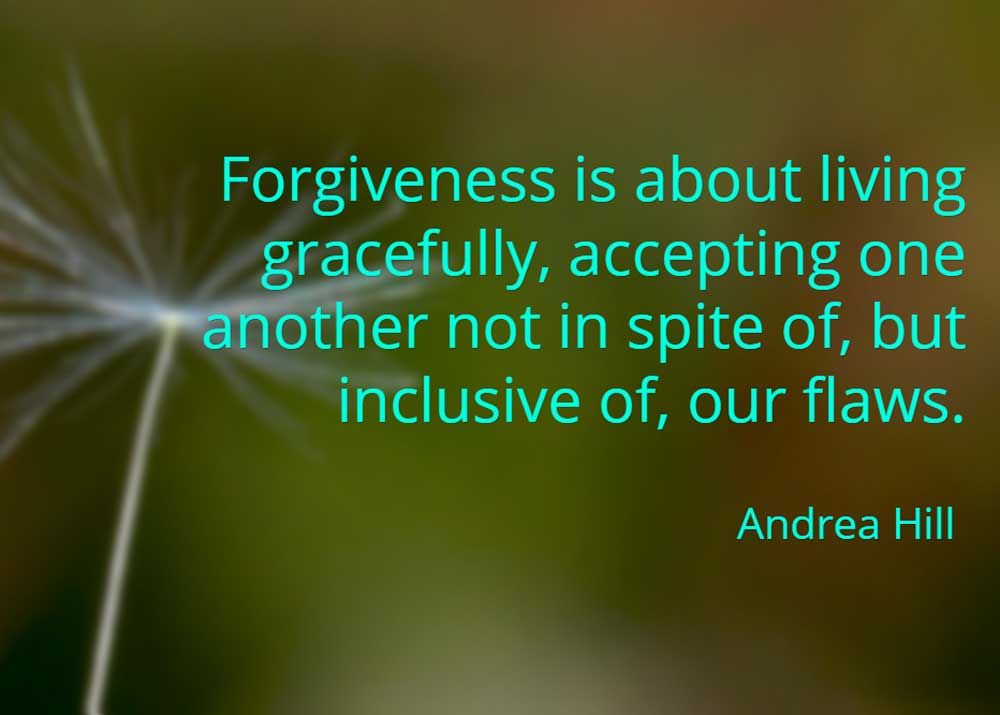 What I Finally Learned About Forgiveness

I am a very good parent. I am also a very flawed parent. As I have learned, you can’t really be one without being the other.

It took me a (shamefully?) long time to recognize this about my own parents. I was nearly 30-years-old before I saw them as the people they are, and not just as extensions of their parental roles (and therefore, of me).  By then, I had managed to be mad at/disappointed in both of them for at least a decade. Our relationships were painted by my judgment of them.

I don’t remember my change of heart as a sudden flash of insight. It was more gradual, and probably grounded in the fact that I was a parent myself.  I do remember with blinding clarity a time when I made a decision that caused my daughter much anger and anguish. I agonized over it, because I knew that though the decision had a temporary (but very real) negative effect on her, it would have a long term positive effect on our family and on my ability to be a good human being and role model. We weathered it, and in the process I learned as much about being a good child as I did about being a good parent.

My parents brought their full humanity to the role of parenting - and I had a terrific childhood. But the things that work very well in a parent/child relationship often are difficult to survive in an adult/adult relationship. They divorced when I was 18, and I resented it. When I finally forgave them, I realized what a fool I was. Forgive them, for what? For being human? Their marriage didn't work, and they suffered plenty for that. It hurt me, but it wasn't about me.

And that’s when I started learning about forgiveness. Because with this new insight came another. That it wasn’t my place to forgive them for being human. Such hubris! So silly. Rather, it was I who needed a bit of forgiveness for being such a self-centered brat.

People let us down. They disappoint. Sometimes it’s a failing on their part, but many times it’s due to factors that are not my business to see or understand – factors that would break my heart for them if I (when I) knew. What I understand today is that most of the time when people hurt you they aren’t even thinking of you. They are thinking of themselves. Does that make them selfish? Sometimes yes, sometimes no. Does that make them unworthy of forgiveness? I certainly hope not, because if that’s the case, we’ll all end up lonely indeed.

Today, I put my approach to forgiveness in a few categories. I always start with the totality of the relationship. Has this person been loving, kind, honest, supportive of me in our lives together? I think about all the positive aspects of the relationship. Then, if I am let down, I compare the nature of the grievance to our overall experience. In most cases I realize that the fact that I am pondering their “need” for “my” forgiveness outs me as the sometimes self-centered person that I am.

There have been relationships in my life that were characterized by repeated instances of abuse, disrespect, lack of empathy, or selfishness. Patterns are sometimes hard to see, and can only be recognized in hindsight. Those relationships I now treat with forgiveness with a distance. The forgiveness part is no longer about me, on a high horse, granting a benevolence. Now, the forgiveness is about me, in the equally-messy-house-next-door, recognizing that each of our experience of humanity contributes to different failings. Some of those failings I can live with, some I can’t. At a certain point I won’t set myself up for further disappointments, but I don’t close the door to my messy house either. Why? Because people A) have their reasons, B) suffer their individual pain in individual ways, and C) can change. I think the hardest part of forgiveness with a distance is being thoughtful and careful about what I label as a pattern. Someone who consistently and blatantly takes advantage of you or takes you for granted is a pattern. Someone who stresses out and acts annoying every time you throw a party isn’t a pattern – that’s just a person who stresses out over parties. Unless you throw parties daily, as an integral part of your every-day life, you can’t call that a pattern. Someone who makes a huge one-time decision about his or her own life - even if it hurts me - isn't demonstrating a pattern.

What about those who do real harm? I don’t personally believe I owe them forgiveness. Harsh? I don’t think so. The real harms that have been done to me in life have been - luckily - few. In those cases, my primary responsibility was to reclaim my health and my dignity. I have never felt for a moment that forgiving the harm-giver was necessary – or even appropriate - to my recovery.  And for the record, real harm isn’t an argument about money, a particularly painful criticism, or even a refusal to support a life decision. Real harm comes with physical pain and damage, emotional devastation, or a clear threat to your well-being. Anyone who would do real harm to you isn’t someone to have a relationship with. The very best to shoot for in a case like that is forgiveness with a (big) distance, and then only if there's a mighty good reason to do so. I let the harm-givers settle their debts through the justice system and/or the Universe, and I let myself move on.

When I was still quite immature, I believed forgiveness was something you gave someone, a gift, a demonstration of your superiority (but in a nice way, of course). Today I understand that forgiveness is a way of living gracefully, in complete acceptance of the humanity that we are and that we are surrounded with.

I am a very good parent. I am also a very flawed parent. Yet my children love me, not in spite of, but inclusive of my flaws. There is no better gift one can give a relationship than . . . forgiveness? No. Gentleness. The true nature of forgiveness lies in gentleness. Be gentle with your loved ones, today, and every day. Because even when we know someone very well, we sometimes don’t know them very well at all.