It's Not Locker Room Talk. It's Violent Foreplay.

10 October 2016
Rape culture is fueled by the passive acceptance of locker room talk. If you want the women in your life to be safe, reject this sad excuse for joking around. 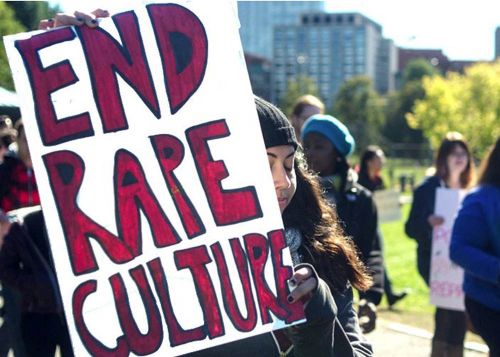 One out of every 5 American women will be raped in her lifetime.

One in 4 girls and one in 6 boys will be sexually abused before they turn 18 years old.

It’s hard to come up with clear statistics for sexual assault, because in some states the assault statistics are included with the rape statistics, and in many other states they are not. Additionally, a very large percentage of sexual violence goes unreportedWhat we do know, is that somewhere between 35% and 60% of American women will experience some type of sexual assault in their lifetime.

This means that you most definitely know a woman who has been raped or experienced some form of sexual violence.

This is why “locker room” talk (whatever that is) is not acceptable. Ever. When people banter about sexual violence toward women, they reduce the gravity of it to something the level of a joke. Rape is never a joke. Getting your body groped as if you were an item on a grocery shelf is not a joke. Going through years of therapy so you can actually feel as relaxed as you try to look when you go to work or walk outside your house is not a joke.

Want me to lighten up about this? Oh, hell no. Not until you’ve experienced that sexual assault in my shoes. Not until you’ve walked into a crowd of people, quieted the monkey voice in your head, and counted off each woman you see as follows:

Maybe then, when you leave that crowd and all its tragically violated women behind you, you’ll know that locker room talk isn’t a thing. It’s just another form of violent foreplay.