Integrity is A Russian Doll

An integrity-infused business is all-or-nothing. You’re either feeling it or you’re not, and if you’re not feeling it, it will bite you in the bottom line.
02 June 2015
Never Miss a Business Post

Look in a thesaurus for synonyms for integrity and you get a lot of stuffy, judgy words. Probity and rectitude on the mildly gross end, virtue and purity on the annoying end. So as you might imagine, it’s hard to write about integrity without coming off like a prude. Yet, here I go, because I like a challenge I guess.

As I write this I’m still in Jewelry Week mode, though certainly it applies to every type of business. Yet, I do think the stakes are higher right now for the jewelry industry than most.

There was never a time when honesty in business didn’t matter, but there have been times when businesses could get away with, um, less. Times when business wasn’t under a microscope, times when communication was from business-to-consumer, and the only way consumers could talk back was to call the Better Business Bureau. Times when the moral compass of the country wasn’t the topic of hundreds of thousands of conversations each day on Twitter, Facebook, and Google+. We are no longer in those times, and I think that’s a good thing. A great thing.

But here’s the deal. An integrity-infused approach to business is all-or-nothing. You’re either feeling it or you’re not. If you’re not fully feeling it, you’re not going to be fully acting on it. And if you’re not fully acting on it, it’s going to bite you in the reputation/employee-turnover/vendor-relationships/bottom-line. So if self-accountability isn’t enough for you (and I do believe it is for most of us), perhaps market accountability can serve as a more potent motivation.

What do I mean by all-or-nothing? I mean that integrity is a cultural thing. I’ll never forget my first sales call, over 30 years ago. I was sent out with one of the top salesmen in the firm; a hard-driving, competitive guy with a strong South Side Chicago persona. During the sales call, I oversold our capabilities. I could tell he didn’t like what I was saying, and somehow I managed to shut up. When we got back to his car he scolded me. He told me, “That’s not how this company works. We only promise what we can deliver with confidence. Don’t ever do that again.” Here was a guy whose entire paycheck was based on how much he sold, and yet the company ethic was that ingrained in him.

You know that moment when you don’t feel like paying one vendor bill because others are due and you’re unsure of your cash flow in the next few weeks? It’s not as simple as saying, “Just pay the bill,” because there’s a good chance there’s nothing to pay it with. Integrity goes deeper. It’s about doing (learning how to do) all the things you can do to anticipate and manage cash flow in the first place, so you don’t put your vendors in that position. After all, they have vendors to pay too. Yes, it really is a thing, anticipating and managing cash flow. It’s a business owners’ ethical responsibility to learn it.

We all know people who blatantly take credit for others’ ideas, and those people are ultimately made pathetic and laughable by their actions (or they just fade away). But integrity goes deeper; it’s about all of us trying to see if our ideas are original before forging on. You know that idea that just popped into your head? Maybe it’s for a design, maybe it’s just for a social media post. Do you stop and think about whether or not that idea actually came from you? I know that sounds funny, but it happens to all of us every day. Our brains hold on to every impression and every experience we’ve ever had, and then dish those thoughts up at random times. We do a lot of writing at my company, and one of our disciplines is to run every idea through Google Search and an academic plagiarism database. Very few ideas are genuinely new, but we have a responsibility to ensure that we are offering at least a new perspective and/or to acknowledge the originator.

The way we talk about people is an important part of integrity. Some women in my town are having a field day posting Facebook pictures of a very handsome yet very odd man who is seen about town. They aren’t cruel about him, but they are catty. I know these women – they’re good people. They also own businesses. I just cringe every time a new post goes up, because I can imagine how this reflects on them professionally, and I’m terrified that poor guy will somehow get wind of it and be hurt.

I’m also still surprised by how some people talk to other people. It really doesn’t matter if the other person is an employee, a family member, a competitor, a stranger, or a business colleague – there is never an excuse for approaching another person without concern for their dignity. When someone yells at, talks down to, or in any way belittles (passive aggression and left-handed compliments included) another human being, they are stating clearly and emphatically that they lack self-control and respect for others.

Having integrity involves looking at yourself carefully, and questioning whether or not you are putting self-interest over the interest of others. I’m not suggesting we all become a bunch of martyrs – we each have a responsibility to look out for the welfare of ourselves, our families, our businesses, and our communities. But welfare is not a zero-sum game. When people are committed to ethical behavior, they seek solutions that benefit all with vigor, open-mindedness, and a dose of humility.

My dad is a retired federal judge, and he spent his adult life adjudicating the rights and wrongs of things. I remember how he would sit at his desk late at night with just the desk lamp on, poring over his notes with his hand on his forehead. Deciding what is right and wrong is heavy work. But for his own children, his advice was simple. We were taught that a small wrong is essentially as bad as a big wrong, because if you can rationalize wrong at all, even just a little bit, even for just a minute, you’ve given yourself permission to accept wrong as right, and once you do that, everything else is just a matter of degree.

So now, in our world of intense market scrutiny, awareness, and discussion, the stakes are very high for doing the right thing. If we want to do the right thing on the big stuff, we need to make sure we’re looking at all the little stuff. Because integrity is an all-or-nothing proposition. We will stumble and be human about it, but let’s get on the path and stay on it. If we are accepting of anything less than integrity from ourselves, then everything else is just a matter of degree. And I suspect that the market will ultimately judge us on that. Harshly. 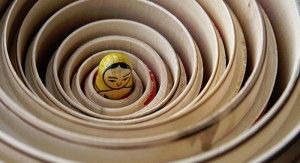