Caution! Don't Try This at Home

The truth is, nearly every manager demonstrates a little FETCH once in a while.
29 November 2007
Never Miss a Business Post
I have adult and near-adult (or perhaps, all near-adult) children, so I hear a lot of horror stories about bad managers and bad management. I think it’s good for my kids to learn these lessons – it will keep them in college. But I am appalled at the vast amount of unacceptable behavior that passes for management in seemingly responsible businesses.
So, what got me started on this tirade (oh yes, disclaimer . . . this is a tirade)? The buzz of the week is that a woman I respect very much was told, if not by a screaming boss certainly by a boss at the far end of rational, “Just SHUT UP and listen to me!”

Hmm.  OK. The woman who was screamed at is definitely not timid. She is dynamic and intelligent and has an extremely high bias to action. So is it possible she was holding her own in a disagreement? Absolutely. Is she the kind of employee every boss wants to have? Well if you could clone her, our economy would improve overnight. What on earth would make an employer, who is dependent on having dynamic, intelligent, active employees, demoralize this one so completely?

I struggle to even answer that question. But here, let’s try. Hey, I haven’t invented any acronyms in at least two years. Let’s do an acronym.  How about . . . FETCH.  As in, “Go!”
I think this might work.
What does the “F” stand for? Faultfinding. The FETCH manager is the opposite of the ideal leader that Jim Collins defines. Collins says that a Level 5 Leader has a specific relationship to the mirror and the window. When things are going well, the Level 5 Leader looks out the window and recognizes all the contributions of others. When things are going poorly, the Level 5 Leader looks in the mirror at herself. The FETCH manager spends a lot of time looking out the window when things are going poorly, and makes employees pay for his or her personal stress.
“E” stands for Entitlement. The FETCH manager believes they are entitled to treat others poorly. Why? Well there could be a host of reasons, mostly relating to the esteem they believe should go along with the role the FETCH manager possesses.
“T” stands for Thoughtless. The definition of thoughtless is interesting. The most commonly understood meaning is lack of concern for others, and the FETCH manager definitely demonstrates this. But thoughtless also suggests insufficient understanding, a lack of awareness that blinds you to the fact that others just may know something you don’t know. Thoughtless is a good word for the FETCH manager.
“C” stands for Condescension. When one feels entitled by role, one then assumes an air of superiority with others, sufficient to say, yell at them as one might imagine a landowner yelling at a serf.
“H” stands for Hubris. The FETCH manager suffers from exaggerated self-confidence. Surely, if they are the boss, they must be the boss for a reason. And that reason must be that they are right. Or they care more than everyone else cares. Or something.
The truth is, nearly every manager demonstrates a little FETCH once in a while. Most of us don’t go so far overboard as to yell at someone to SHUT UP, but we do have moments that we are embarrassed by later, events that we learn from, and which cause us to resolve to become better people. But there are folks out there who never seem to learn, who make their subordinates GO FETCH again and again. And again.
If you’re laughing and nodding your head as you read this, you’re probably not one of them. If you’re all pissed off and in a sweat, you might want to reexamine your relationship with the mirror. Come on people. Our employees aren’t children. They’re adults – with intelligence, experience, and self-respect of their own. We can disagree with them, sure, but we’d better be prepared to let them disagree with us as well.
I imagine some folks, perhaps these FETCH folks, might try screaming SHUT UP! at their children on occasion, though I don’t see how it would contribute to a healthy family. But do you think they would exercise the option to scream SHUT UP! at their spouses very often? I suspect not. Even they would know better than to use that behavior at home. 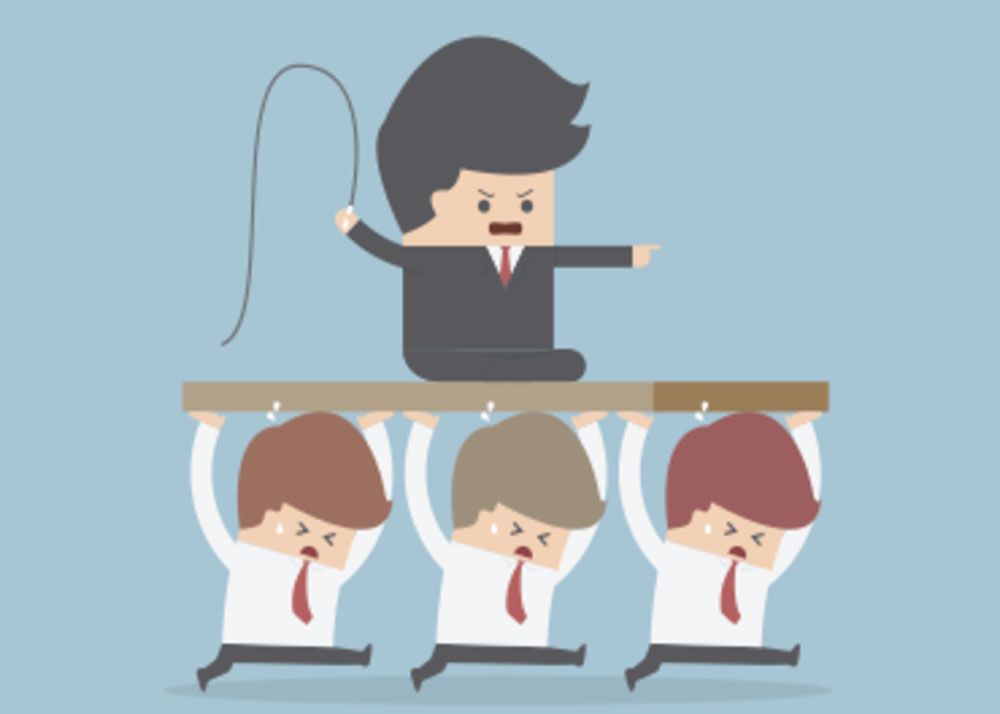